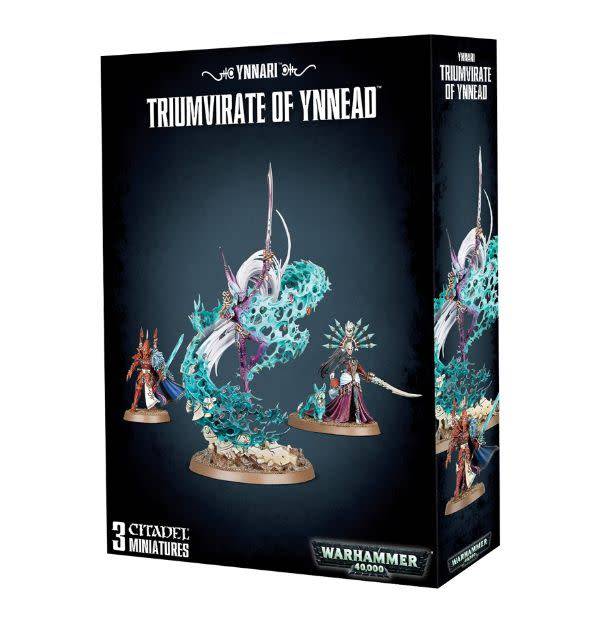 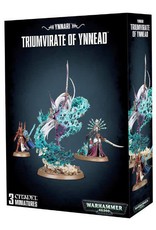 Though the chosen of Ynnead are extremely dangerous in their own right, when they marshal their strength as one they have the power to alter the fate of the galaxy. Striding majestically at the front comes Yvraine, high priestess of the Whispering God; by her side is the Visarch; and hovering above like a macabre angel is the Yncarne. Though these three are surrounded by an air of morbid power, they represent the Aeldari race’s greatest hope for a dramatic rebirth.

This box contains the Triumvirate of Ynnead. It includes:

The Yncarne, Avatar of Ynnead, wreathed in a roaring psychic hurricane, invigorating the spirits of the Aeldari around them, the Yncarne comes armed with Vilith-zhar, the Sword of Souls which can take many forms – this miniature includes a sword and a pair of daggers;

Yvraine, Emissary of Ynnead, clad in the style of the ancient Aeldari and accompanied by a psychic familiar known as a gyrinx, she carries the Cronesword Kha-vir, the Sword of Sorrows;

The Visarch, Sword of Ynnead, Yvraine’s chosen champion, clad in baroque armour of the ancient Bel-Anshoc style, he channels the lost souls he has accumulated to become an ever-more lethal opponent. He is armed with Asu-var, Sword of Silent Screams.

Rules for using these miniatures in games of Warhammer 40,000 are provided in the box.